Toward the Integral Internet

Twelve years ago, I was sparked by The Cluetrain Manifesto, a prescient book by Rick Levine, Christopher Locke, Doc Searls, and David Weinberger. This is from the introduction: 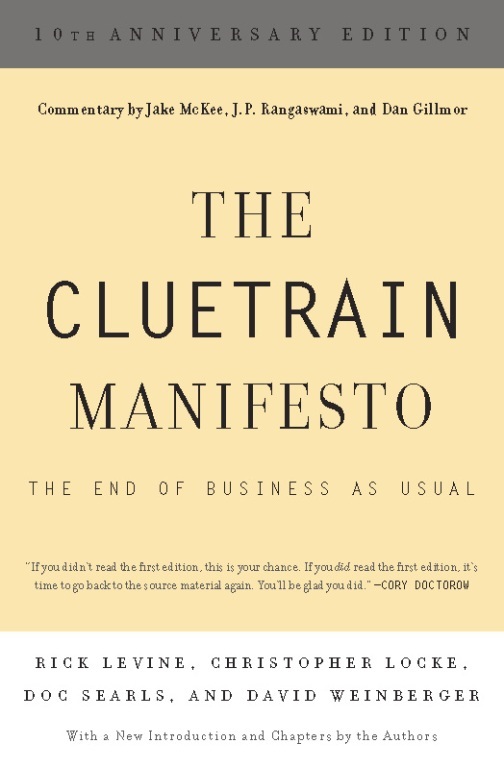 What if the real attraction of the Internet is not its cutting-edge bells and whistles, its jazzy interface or any of the advanced technology that underlies its pipes and wires? What if, instead, the attraction is an atavistic throwback to the prehistoric human fascination with telling tales? Five thousand years ago, the marketplace was the hub of civilization, a place to which traders returned from remote lands with exotic spices, silks, monkeys, parrots, jewels — and fabulous stories.

In many ways, the Internet more resembles an ancient bazaar than it fits the business models companies try to impose upon it. Millions have flocked to the Net in an incredibly short time, not because it was user-friendly — it wasn’t — but because it seemed to offer some intangible quality long missing in action from modern life. In sharp contrast to the alienation wrought by homogenized broadcast media, sterilized mass “culture,” and the enforced anonymity of bureaucratic organizations, the Internet connected people to each other and provided a space in which the human voice would be rapidly rediscovered.

So, if Web 1.0 was the “published Web” and The Cluetrain Manifesto predicted what was to become the “social Web” (Web 2.0), I believe the next iteration, Web 3.0, will be the “Integral Internet,” where the noosphere of virtual knowledge gets better and better at interacting with fundamental human needs, values, and experiences.

Web 1.0 was “It.” We consumed what was delivered to us and our value to the marketplace was measured with demographics and psychographics.

Web 2.0 was “Us.” Now, we could easily create and share our own media with friends and strangers alike, and marketers measured our worth via the social graph of our connections.

Web 3.0 simply “is.” The deepest Integral Internet interacts with the realm of spirit, of breath. We breathe ideas and experiences, and the Internet carries them and amplifies them to others, no matter where they are. See how fast collective experience flows around the world through Twitter and Facebook. As devices become more powerful, more ubiquitous, and more miniaturized, the boundary between virtual and physical will become even more permeable. The Internet itself begins to breathe.

We’re moving toward an era of the hyper-global and the hyper-local. Joyce wrote, “In the particular is contained the universal.” Through our nearest neighbors and neighborhoods — indeed by becoming more present within ourselves — we can experience the universe more deeply.

“Here” and “away” are being inverted for our children. “Exploring” no longer means going to a new part of the world physically first, for we can learn as much through Wikipedia, Google Earth, and local blogs, than we ever used to through travelling as tourists. The greatest unknown to be explored is now within us, the mysteries of who we are: the “who” that sees the world through our particular eyes.

In the past, gatekeepers were required to intermediate our experience of the world — mostly due to less powerful technologies like papyrus and illustrated manuscripts and printing presses. They are no longer needed. We can now experience the universe more directly through the noosphere (Web 3.0, the Integral Internet) and within ourselves.

So, good bye to recorded media production conglomerates, corporate news paper delivery systems, educational institutions that glorify the life of the mind at the expense of the heart and spirit, arbitrary national governments created for stage-coach era communication.

We set our life priorities based on how we see the world. We now have new priorities for new worldviews. Perhaps we can protect that world so our children may steward it with deeper awareness and respect.

This is one of my presentations from 2009. Still relevant.